Several member states of the European Union have been confronted with increasing demands for subnational regionalisation in the past few years. The origin of these independence movements is closely related to the political and economic context of a region. Therefore, the constitutional road towards independence is complex. The differences between Scotland and Catalonia in their process to potential independence exemplify this perfectly. In the wake of the historic year 2014, this post provides an overview of the recent developments in the Scottish and Catalan independence movements.

Is Scotland heading towards a new referendum? 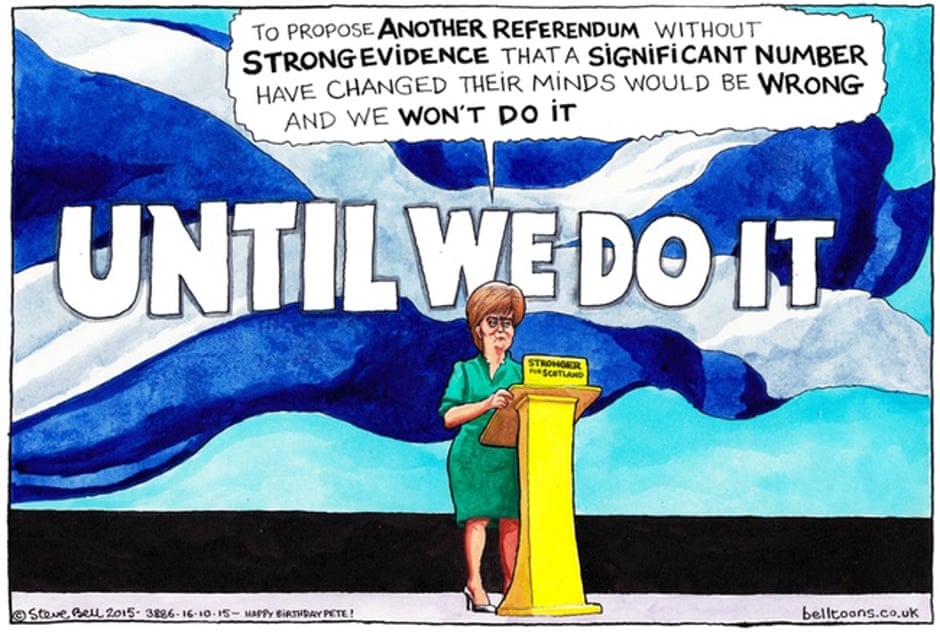 The Scottish independence referendum of 18 September 2014 was a historic occasion for both the United Kingdom (UK) as well as the independence movements in Europe. The creation of a (constitutional) framework for the referendum via the Edinburgh Agreement, followed by the negotiations between the Scottish and British governments were indeed unprecedented in the regional struggle for independence. Other regions took the performance of the UK as an example for the attitude of a mother state towards a subnational wish for self-determination. In the end, the Scottish people did not unite behind independence. The unionists attained a clear majority with 55% of the votes.

The Scottish referendum and the road that led to the referendum are unprecedented in world history. The acknowledgement of the British government of the principle that the Scottish people can assert their right to self-determination by means of a referendum, and the large-scale participation of the people, do have significant constitutional consequences. The Scottish process will most likely set a significant precedent for the role of direct democracy in fundamental constitutional reforms. Furthermore, the referendum provides a clear answer to the problems with which referendums often need to cope: elite control and the lack of information. On the one hand, the negotiations between the British and Scottish governments and the supervision of the independent Electoral Commission ensured a broad agreement on the referendum’s delimitations. Furthermore, civilians had access to an unprecedented stream of information, from the political world as well as the (social) media.

After the referendum, the British Prime Minister Cameron declared that a further devolution of powers to Scotland would be investigated by the so-called Smith Commission, which was created by representatives of the five political parties represented in the Scottish parliament. The commission resulted directly from the “Vow” of the large unionist parties to transfer more powers to the Scottish parliament in case of a no-vote. The report of the commission was presented on 27 November 2014 and is based on three key components: the provision of a long-term but responsible constitutional solution for Scotland, the creation of a healthy economy, jobs and social justice and the strengthening of the financial responsibility of the Scottish parliament.

The recommendations of the commission were translated into the Scotland Bill 2015-2016, that will amend the renowned Scotland Act. Due to the modifications, the Scottish parliament and government will be acknowledged as permanent components of the constitutional structures of the U.K. Additionally, the Scottish parliament will be able to determine the tax rate of personal income tax, and smaller taxes – such as the Air Passenger Duty – will be transferred completely. As such, the parliament will be responsible for the collection of more than half of the Scottish public spending for the first time. Due to the transfer of welfare powers with a value of 2.5 billion pounds, Scotland is also able to develop their own (limited) social security policy.

However, the good relation between the U.K. and Scotland could be jeopardised in the near future. Firstly, the Scottish Nationalist Party (SNP) did not want the referendum to only consist of one question. After all, there was more support for further devolution within the UK than for an independent Scotland. The rapid report of the Smith Commission about the devolution proposals for the large part even entails a return to the old political backrooms. Moreover, the SNP has significantly increased its political support after the national elections of May 2015. The party attained an impressive 56 of the 59 Scottish seats in Westminster. Furthermore, the referendum about EU membership of the UK will most likely reignite the independence debate in Scotland. Scotland has consistently been a proponent of European membership. Will Scotland be able to remain a member of the EU if the majority of the British people decide to leave the EU? Thus the exit referendum has the potential of breaking up the British union. The British austerity problems provoke much criticism from the Scottish side. As recently declared by the former Scottish Prime Minister, a new referendum could be in the making. For the time being we will have to wait and see whether the British conservative government – that gained force in the general elections – will again participate in this referendum. 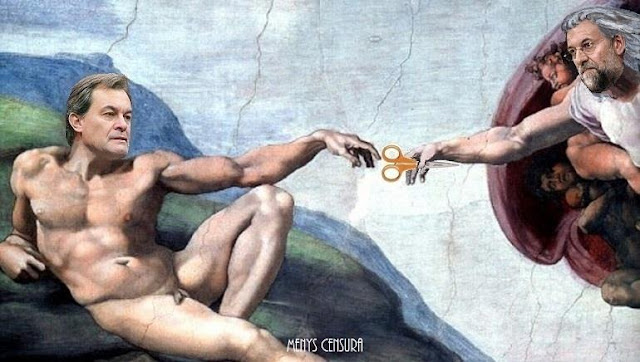 Throughout history Catalonia has always had strong local institutions, their own language and culture. The autonomy enjoyed by Catalonia, however, came to an abrupt end during Franco’s dictatorship. Franco proclaimed one state with one language. Speaking Catalan was seen as a form of resistance and a cultural repression of everything Catalan ensued.

After Franco’s death a transition to a Spanish democracy took place. As compensation for the dictatorial repression, the new Spanish Constitution explicitly recognised the regions and provided them with a certain level of autonomy. The 1979 Estatut d'Autonomia de Catalunya ensured the establishment of a Catalan government and parliament.

For a long time the Catalan independence movement  had only moderate demands. However, the Catalan independence movement has strongly redirected itself throughout the years. Where it started with a demand for cultural autonomy, the last few years the emphasis has been on fiscal and economic autonomy. The issue of an independent Catalan State also resurfaced significantly in the last couple of years. This radicalisation is mostly due to the Catalan Prime Minister Artur Mas. The struggle for independence was for a long time exclusively related to the left-republican ERC. Since the narrowing down of the Statute of Autonomy, the centre-right CDC of Prime Minister Artur Mas has also increasingly played the nationalist card. A number of factors have provoked this development.

A first factor that encouraged the radicalisation of the Catalan position is the failure of the new Statute of autonomy that was proposed in 2006. After lengthy negotiations between Spanish Prime Minister Rodríguez Zapatero (PSOE) and, at the time, opposition leader Artur Mas, an agreement was reached in 2005 with regard to a new autonomy status which would provide Catalonia with more autonomy. Between 2006 and 2010 it indeed appeared that the new autonomy status would de-escalate the situation. Although the Spanish and Catalan parliaments supported this Statute, it was undermined by the Spanish Constitutional Court. This failure and the fact that Mariano Rajoy (PP) arrived in power in 2011 and blatantly refused any dialogue with Catalonia, resulted in a collision course between Madrid and Barcelona.

A second important factor is the harsh austerity policy of the Spanish government. The notion emerged in Catalonia that in an independent Catalonia the austerity measures would be less severe. Indeed, Catalonia contributes 15 billion euro net to Madrid.

In the aftermath of the debacle surrounding the autonomy status, in 2013 a sovereignty declaration was drafted by the Catalan institutions which stated that the Catalan people have the right to choose their own future. This declaration was also deemed to be unconstitutional. In response, Artur Mas announced the organisation of a referendum for November 2014. The Spanish Constitutional Court interfered once again and declared that a referendum could only take place on the national level in order to be constitutional. Although the referendum did not have any legal basis and therefore would not be able to generate further consequences, it took place on 9 November 2014. 80% of the participating 37% of all Catalans eligible to vote, voted for independence. This boosted the independence movement in the region.

On 27 September 2015, regional elections took place. Under the influence of Artur Mas, these elections were, however, transformed into a referendum for independence in disguise. He formed a cartel together with the left-nationalist ERC under the name Junts pel Sí (Together for Yes). In case of victory, Mas promised to lead Catalonia towards independence. However, the election results were ambiguous. The alliance won the majority of the seats, but did not attain the majority of votes, and thus in fact lost the referendum. With over 77% the turn-out for these elections was significantly higher than for the referendum in 2014. The Spanish Prime Minister Rajoy responded after the Catalan regional elections with the announcement that his government was willing to negotiate with the Catalan people ‘within the framework of the (constitutional) law’. The Prime Minister remains resistant towards independence by referring to the unity of the nation as determined in article 2 of the Spanish constitution.

Following up on the promise, the Catalan parliament approved on 9 November 2015 a resolution on independence. The motion declared “the start of a process toward the creation of an independent Catalan state in the form of a republic”. The resolution was passed by 72 to 63 votes. The Spanish government reacted swiftly by stating that it will appeal against the decision before the Constitutional Court.

Despite the fact that the Spanish constitution forbids any form of territorial secessionism, it is important to mention a decision of the Canadian Supreme Court. In the so-called Québec-case, the Supreme Court set an important precedent. The Court investigated whether Québec possessed the unilateral right to separate itself from Canada under national or international law. Although the Canadian constitution did not provide such a right, the Court proclaimed that the constitution should not be a straight-jacket. The Court declared that when a clear majority expresses a demand for independence on the basis of a referendum with a clear question, the demand for separation would gain democratic legitimacy that all other components of the (con)federation should acknowledge. In other words, the democratic will to secede from Canada would obligate the Canadian mother state to engage in negotiations on Québec’s potential secession. The verdict of the Court led to the enactment of the so-called Clarity Act that outlines the ‘rules’ for an independence referendum. The federal parliament has a significant monitoring authority on both the question and the required majority. Québec’s independence would, however, also require a federal amendment of the constitution. It is clear that the Court’s decision is an important precedent, given the parallels between the situation in Québec and Catalonia. Nonetheless, there are clear differences between the courts’ approaches. Where the Canadian Supreme Court acknowledged the constitutionality of an independence referendum, the Spanish Constitutional Court blatantly refuses to do so. Therefore, in case of a positive vote in Catalonia, the Spanish government would constitutionally not be obligated to negotiate. Moreover, much will depend on the upcoming Spanish general election that will take place in December 2015 .

Similar to the case of Scotland, one could ask the question whether it would not be better to reorient the debate towards economic and fiscal independence within the current constitutional framework. It is our conviction that Madrid’s strained handling of the demand for independence has paved the road to radicalisation. In this regard, the Spanish government has much to learn from the British.

GUIBERNAU,M., “Prospects for an independent Catalonia”, International Journal of Politics, Culture and society 2014, 27, 5-23.

HAPPOLD, M., “Independence in or out Europe- An independent Scotland and European Union”, International and Comparative Law quarterly, 2000,Vol. 49, 15-34.